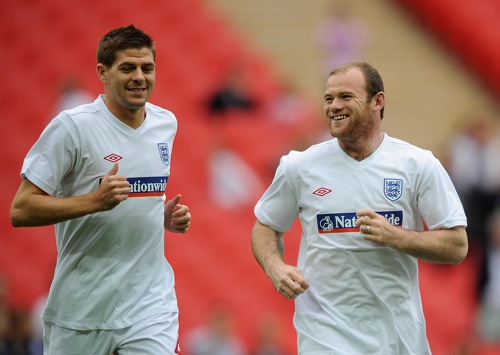 Sir Geoff Hurst, who emerges from hibernation every four years, would like to see England manager Fabio Capello pair Wayne Rooney & Steven Gerrard up front in South Africa, albeit in a 4-5-1 formation.

“I am convinced that 4-5-1 is the formation he [Capello] should play,” Sir Geoff said.

“I think that our best combination up front to compete with the best would be Rooney and Gerrard – they would arguably be the best partnership in world football.

“Wayne has played well on his own up front. If you had asked me two years ago then I would’ve told you he wouldn’t be able to do it. He has had a magnificent season though and for a lot of the games he has played up front alone in that system.

“I think Steven Gerrard’s best position is where he plays for Liverpool – just off Fernando Torres.

“He and Wayne already have a tremendous working relationship. I’ve seen that when they play for England. They haven’t played too many games up front together but when they have there have been instances where they have shown a good understanding and together I think they can be a very dangerous pairing, certainly towards the latter part of the tournament.”

Agree with Hursty? I think he talks a lot of sense. Gerrard is clearly most effective in and around the opposition penalty box, not sitting back in the centre circle.

Hurst’s preferred formation would depend partly on the fitness of Gareth Barry, who has the discipline to do the defensive duties in midfield whilst Gerrard and greedy Frank Lampard rove forward in search of Hollywood goals/deflected tap-ins (respectively).