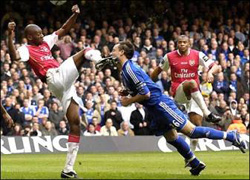 Chelseaâ€™s squad for last weekendâ€™s Community Shield match was so bare that they played without a recognised striker for most of the match. And it looks like theyâ€™ll have to make up the numbers when their Premier League kicks off on Sunday.
John Terry, Michael Ballack and Wayne Bridge are definitely out. Didier Drogba doesnâ€™t look like being ready and there are doubts over Salomon Kalou and Andriy Shevchenko.
If the last few seasons have taught us anything, it’s that itâ€™s crucial to get off to a good start. Itâ€™s how Chelsea won their first two titles, Man Utd made it a priority last season and Liverpool have said the same this season.
With the rest of the Big Four looking impressive in pre-season and with fewer injuries to hold them back, could it be all over for Chelsea before it has even began?
Or, is the clubâ€™s multi-million pound second string good enough to cope until the casualties return?