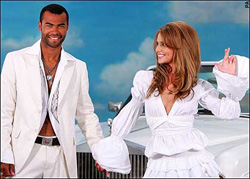 He may well be a born leader of men but that doesnâ€™t mean Fergie wears the trousers at home. Apparently, the United manager has been grounded tonight and will miss Unitedâ€™s final pre-season friendlies while he helps his missus move house.
Weâ€™re not sure what this is going to do for a reputation built on fear and can imagine a few ‘whipping noises’ being whispered around the Man Utd dressing room â€“ not that Sir Alex could be left any more red faced.
But, itâ€™s not the first time that a footballer has had to bow to the pressures of an institution they call marriage. David Unsworth famously upset John Gregory by turning his back on Villa to keep â€˜er indoors happy, Andriy Shevchenkoâ€™s move to London was apparently an effort to help learn his wifeâ€™s language and would Ashley Cole have worn that outfit (see above) if it wasn’t for Cheryl?
Can you think of any more wives that call the shots during home matches?