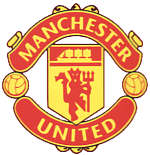 Now, to our glory hunting Manchester United fans (I’m kidding! I’m kidding! Back off!) to find out about their dreams of silverware and stuff. I interviewed the main lad at new Shiny blog, ManUnitedPies, and found that he was very busy, and therefore, a bit short on words… but you would be if you’d been gloating all summer at Chelsea fans.
Introduce yourself.

Sam Collins, Man United, manunitedpies.tv
How do you think you’ll do next season?
Champions again
What do you think of your transfer activity this summer?
Great buys in Hargreaves, Nani and Tevez when he signs up

Who do you think will make the biggest mark in the squad?

Tevez probably but Nani if he gets a decent run

Who owes you a decent season?
Gabriel Heinze – but as he won’t get a game Wes Brown
Which youngster should we all watch out for next season?
Nani obviously, Fraizer Campbell and Lee Martin
Who do you think will finish in the top 4?