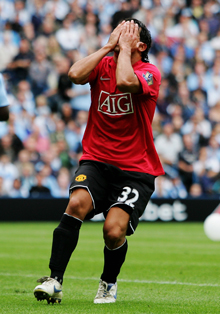 With only two points to show from their first three games, itâ€™s Unitedâ€™s worst start to the league for 15 years and Fergie has already admitted that the Champions face an uphill struggle to reclaim their title.
Equally disappointing is the fact that, despite a hatful of chances, theyâ€™ve only scored a single goal so far â€“ and there were plenty of missed opportunities again during yesterdayâ€™s derby.
Injuries and suspensions have robbed them of their main goal scorers while the clubâ€™s decision to release fringe forwards like Smith and Rossi looks like backfiring all too early. Rooney is out for the forseeable, Ronaldo is paying the price for petulance, Solskjaer and Saha are still not fit and Tevez needs more time.
So, with the transfer window still open, should United splash more cash on the position they need most or will normal service be resumed once players return?