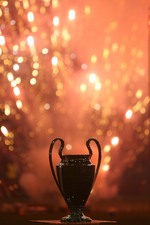 So there are six (count ’em!) clubs in the group stages of this season’s Champions League: the big four in England, plus Celtic and Rangers. The English clubs can’t meet each other, because they are all amongst the top eight seeds, but there’s a very strong chance that we’ll see another so-called ‘Battle of Britain’, namely an England v Scotland group showdown.
So which of the British teams has the best chance of winning the tournament? Celtic and Rangers are obvious outsiders, because, well, they’re not as strong as the English clubs. Chelsea, Man Utd and Liverpool all have extremely strong squads (although Man Utd should sign another striker before tomorrow’s transfer deadline), whilst Arsenal have enough quality to go all the way, as long as they don’t pick up injuries to key players (Fabregas and Van Persie). Roman Abramovich is desperate to add the CL trophy to his bulging cabinet and will want Jose Mourinho to focus on Europe. For that reason, I’d say that Chelsea has the best chance, followed by Liverpool, with Arsenal and Man Utd as outsiders.