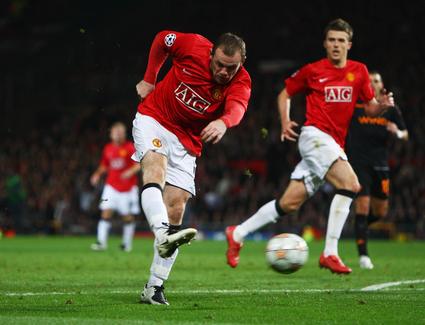 1 A quality finish from Wayne Rooney. He put it the one place where the keeper couldn’t reach it from a narrow angle.
2 But he didn’t seem very happy about it. No smiles – just a few miserable high-fives and a vicious assault on the corner flag.
3 The lack of activity in the first-half was summed up when David Pleat commented: “That’s four crosses in as many minutes now.”

4 Sir Alex Ferguson’s proposed summer move for Micah Richards would be a good one. With Gary Neville out, John O’Shea looks distinctly like United’s weak link (and Max & Paddy).
5 If Roma insist on having Wind as their shirt sponsors, they should at least maximise their profit by getting Rennie to sponsor their shorts.

6 What starts and stops, looks awkward and makes sure its shorts never touch the grass? Why, it’s Cristiano Ronaldo tracking back, of course. For someone who spends so much time diving down the other end of the pitch, you would swear he had a phobia of grass stains!
7 Then again, who would have though C-Ron would spill blood for the cause. Terry Butcher eat your heart out!

8 Forget Arsenal, Manchester United are the new 1-0 specialists.
9 His West Ham experience was the best thing that could have happened to Carlos Tevez. No prima donna tendancies as he waits on the Old Trafford bench, and an obvious determination to impress and work hard when he does make it onto the field.
10 For all their organisation and good play in position, Roma do lack cutting edge and a goal poacher.
11 Great to see Clive Tyldesley continuing his mission to ensure the entire British population is aware that Simone Perrotta was born “just 10 miles from Old Trafford” in Ashton-under-Lyne.
Images Getty