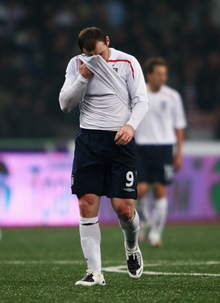 He may be the most gifted player of his generation but why is Wayne Rooney always involved for the wrong reasons when England go out of a major tournament, or possibly qualifying match?
The early signs were good when he burst on to the international scene â€“ man of the match against Turkey to secure a draw that took us to Euro 2004 where he set the tournament alightâ€¦until.
His first metatarsal injury in the quarter-finals against Portugal obviously wasn’t his fault but once gone a dispirited England went on to lose. And his goal against Croatia during that tournament was his last competitive strike for England before Wednesday.
He was rushed back after another broken toe to supposedly save us during the 2006 World Cup but his sending off for ‘ball stamping’ in a rematch against Portugal led to another exit.
And now, while he scored a sensational opener against Russia on Wednesday, it was his mistimed tackle that (outside of the box or not) led to Russiaâ€™s comeback â€“ and we all know how that ended.
Could Wayne Rooney be Englandâ€™s jinx?