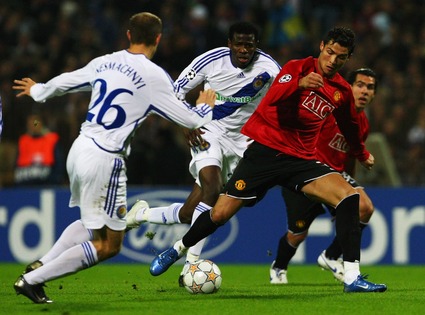 There were not quite as many goals as we saw at the Emirates last night, but this match was not so one-sided and therefore more entertaining. In truth this was a comfortable victory for the English champions, but Kiev never gave up. Kiev are not the force they were in the days of Rebrov & Shevchenko, but to score four goals away in the Champions League is a rare feat. Kiev’s defence was lame and United needed no second invitation to test it. The Wayne Rooney/Carlos Tevez/Cristiano Ronaldo forward line was in devastating form and the Ukrainians had no answer to wave after wave of Red attack.
All in all, another fine night for British clubs in Europe.

Watch all six goals from this match (Via 101GreatGoals)