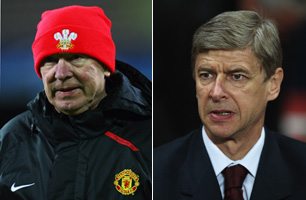 Itâ€™s been one of the longest running feuds in the Premier League but the latest spat between the two is over Sepp Blatterâ€™s plans to limit the number of foreign players in English teams.
With only one Englishman at Arsenal, Wenger is obviously opposed to the idea and it doesnâ€™t take much for Fergie to play Red Devilâ€™s advocate. Is this just more mind games or do either of them have a point?