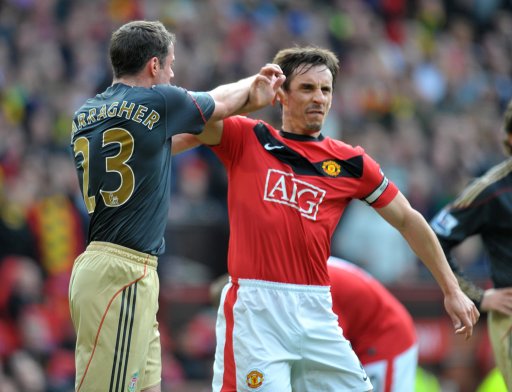 The world has spun off it’s axis this morning as Manchester United veteran Gary Neville has admitted – presumably at gun point – that, although he still despises them with all of his cold black heart, even bitterest rivals Liverpool command more respect than a certain nouvelle riche club that has recently started to throw it’s weight around a few miles across the city – by which I assume he’s referring to Bolton or Oldham.

“When I was a youngster, they [Liverpool] won everything, It was horrible. Jealousy does come into it but I have more respect for their traditions than I would for some of the other clubs coming onto the scene throwing a load of money at it. They [Liverpool] have got history.”

The defender also revealed that he has no plans to move into management once his career at Old Trafford runs it’s course, as he fears he may be a bit too ‘opinionated’ to flourish;

“I am a bit too emotional to be a football manager, if you look at Ryan Giggs and Paul Scholes, they are quiet, considered and patient. They are probably more suited to modern-day management.

I am doing my ‘A’ licence as a matter of course. It is what you should do, but at this moment in time, I haven’t quite got the aptitude for it.”

I don’t think many would disagree with him on that particular point.