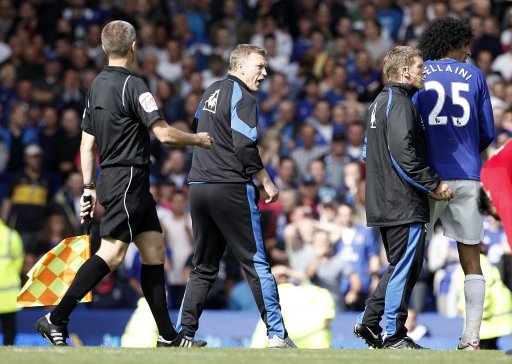 Everton manager David Moyes and his assistant Steve Round have both been charged with improper conduct by the FA, after the pair crossed the pitch after their spectacular 3-3 draw with Manchester United on Saturday to admonish referee Matrin Atkinson for his ill-timed final whistle.

With the score dramatically levelled in injury time, Everton charged forward looking for a winner but Atkinson blew the final whistle just as the sweeping counter-attack reached the edge of United’s box, the ball then falling kindly for Phil Jagielka to shoot.

Moyes voiced his frustration in a post-match interview;

”The two goals were scored after 90 minutes and they’d put up three minutes of extra time. [Atkinson] didn’t get his time right because there was more time to add on for the goals and he played three minutes 30 seconds.

[United] had the corner kick and we had a great counter-attack and he blew up with the ball 25-yards from their goal.

It is a spectator sport with people coming to watch the game and not for him to be the main man and the one who wants to be seen making the decisions. That was a terrible decision in my book.”

The FA, who are not the most avid supporters of the ‘freedom of speech’ concept, have released a statement this morning to outline their stance;

In a statement, the FA said today: ”Everton manager David Moyes and assistant manager Steve Round have both been charged with improper conduct.

”The charges relate to Moyes’ and Round’s conduct towards referee Martin Atkinson on the pitch following the final whistle at Everton’s home match against Manchester United on September 11.

‘Under the FA’s new fast-track procedures, Moyes and Round have until Thursday, September 16th, to respond to the charges and have both been offered a standard sanction of an £8,000 fine should they accept the charge.

If either party denies the charge, the case will be heard by a regulatory commission within 10 working days.”

I put it to you, which of the two parties are actually bringing the game into disrepute?