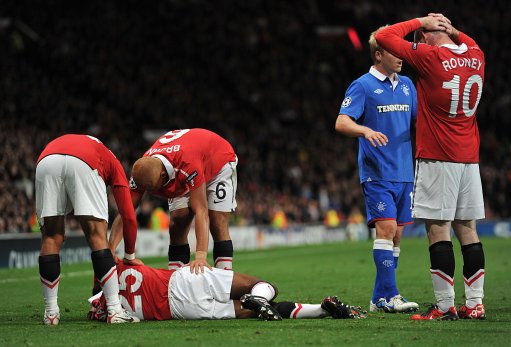 The curse continues. Manchester United winger Luis Antonio Valencia will almost undoubtedly miss the rest of the season after suffering a grotesque dislocation of his ankle during United’s Champions League tie with Rangers last night.

After falling under a fairly innocuous touchline challenge with Rangers defender Kirk Broadfoot, Valencia’s ankle twisted awkwardly under his own weight leaving the 25-year-old’s foot pointing in what can only be described as ‘the wrong direction’.

“It is a dislocation or a fracture and he gets operated on [Wednesday] morning. It was an innocuous challenge but when you saw the Rangers player waving, you knew it was a bad one.

It is a bad blow for the boy. It is similar to the injury Alan Smith [Smith splintered his leg after sitting down on his own foot during an FA Cup tie with Liverpool in 2006] got and you are talking about the rest of the season.”

Here’s a video of the incident, but consider this your warning – it’s grim.