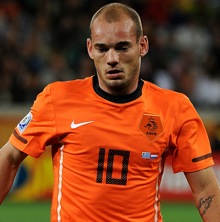 Wesley Sneijder‘s agent has revealed talks over a new deal at Internazionale have broken down.

The midfielder revealed earlier this month that he was hopeful of signing a contract extension, with Inter believed to be keen on an agreement that would keep him at the club until 2015.

However, Sneijder’s long-term future now appears in doubt after his representative Soren Lerby declared Inter had ‘broken their promise’.

“Financially we can’t work out a deal. Negotiations have been pulled off and will only be restarted if Inter will show an opening,” Lerby told Dutch newspaper De Telegraaf.

“Wesley was contacted by clubs across Europe after the World Cup final, but he was very happy in Italy at Inter. He felt he couldn’t leave the club after just one season and the very flattering words of owner Massimo Moratti, who stated he would be the leader for the coming years.

“Wesley would get a fantastic wage and he would get a clause with a high transfer fee. Unfortunately Inter couldn’t keep their promise.”

Lerby added: “Inter’s attitude gives him an awkward feeling. And this is strengthened by the interest of Real Madrid.”

Ah, and there’s the rub. Lerby fancies a fat signing-on fee, and Sneijder wants to follow Mourinho. I hear that Fergie would still be keen on signing Sneijder in January, but only if he could wangle a cut-price deal similar to the one Tottenham made with Real for Rafael van der Vaart. But if Sneijder’s going anywhere, it will be to the Bernabeu – not that I think they need him. Man Utd could really use a player like Sneijder though.