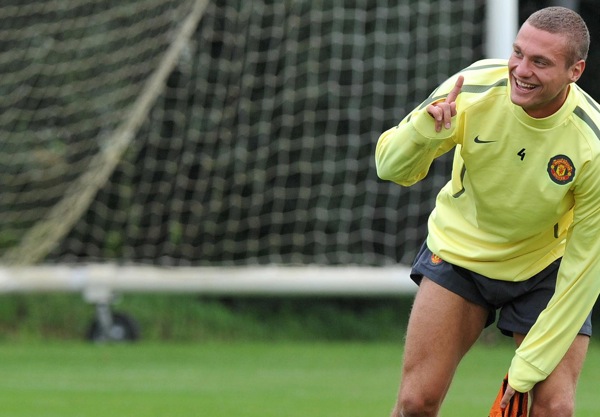 “Over the past few years Gary Neville has been club captain and team captain, but as we know, Gary’s been subjected to an incredible amount of injuries, so the inconsistency of Gary in the team made us have to look elsewhere.

“So when you go to pick a captain you want to pick a captain who is going to be playing every week. Defenders normally come in to that, far easier than the likes of Darren Fletcher. Because we have so many selections in midfield, from time to time we change that around.

“Paul Scholes doesn’t want to be captain, then you’ve got Darren Fletcher who has leadership qualities of course, but we change the midfield so many times. So therefore I chose Nemanja Vidic, who signed a new contract. He’s going to be our most consistent player. If he’s fit, he’ll always play.”

So Vidic wasn’t first or even second choice? And no mention of Rio Ferdinand, whose injury record is a concern.

I reckon Fergie sees Fletcher as the natural club captain, and the spiritual successor to Roy Keane (a true great United skipper) but his reasoning that Fletch won’t play every match is flawed: he offered the armband to Scholes first, but Scholes most certainly won’t play every match either. Strange. Especially as Fletcher is in outstanding form and surely has to be one of the few United players who should play as many games as possible.

Anyway, if Fergie did the maths and ended up with Vidic, it’s not such a bad thing for United. The Serb leads by example and he is one of the first names on the team-sheet. But I would have gone with Fletcher.

And what about Wayne Rooney, supposedly United’s key player. Rooney has not proved he is captain material, but perhaps that extra responsibility would be just what he needs to settle down.

Who would you give the armband to?