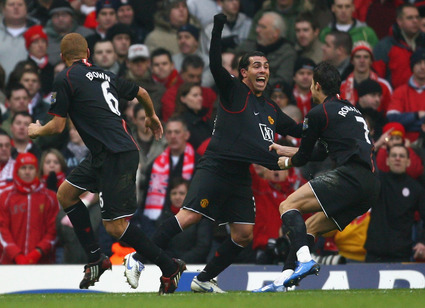 Like the Arsenal vs Chelsea clash, this was not a classic encounter. It was also a surprisingly low-key affair with relatively few talking points. Here are three things I learned from the match:
No.1 Playing in black worked wonders for Liverpool at Marseille, and it also worked for Man Utd at Liverpool on Sunday. So if Man Utd played Marseille at home and Marseille wore black, the French club would winâ€¦ or something like that. Is there something about playing in black that makes you play better? I’d argue yes. I cite Reservoir Dogs:
MR. PINK Why can’t we pick out our own colours?
JOE I tried that once, it don’t work. You get four guys fighting over who’s gonna be Mr. Blackâ€¦
Most blokes will admit that there is something timelessly cool about wearing black. It sure worked for United at Anfield on Sunday.

No. 2 The difference between the top four this season is marginal, but unless Liverpool can find a way to beat the big boys at home, then they will always struggle to win the league: Chelsea, Arsenal and Manchester United have all visited Anfield this season, and Liverpool couldn’t beat any of them. To be fair, Liverpool didn’t deserve to lose to United, but neither did they deserve to win.
No.3 Anderson is going to be a hell of a player. He matched Steven Gerrard in terms of energy, workrate and skill on Sunday, no mean feat for a 19-year-old Brazilian playing his first season in England. He did the same against Cesc Fabregas earlier in the season.
Watch the highlights here