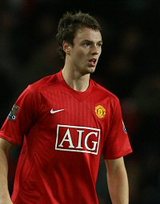 First, what we know about this incident, and I’ll leave the ‘facts’ up to the BBC, because I think they can afford any legal bills more than Pies:
‘Manchester United and Northern Ireland player Jonny Evans has been bailed by police investigating an alleged rape at a hotel in Manchester city centreâ€¦ Police were called to the Great John Street Hotel early on Tuesday after reports a woman, 26, had been rapedâ€¦ Mr Evans was arrested and quizzed by officers after going to a police station on Tuesday evening. He has been bailed until 23 February.’ Via BBC
Evans is currently innocent, but it certainly doesn’t look good for him. He is a suspect in a rape case, and he’s far from the first footballer to have his name dragged through the mud. He’s not even the first Man Utd player to be involved in a sexual assault case: in October 2005, Cristiano Ronaldo was questioned by police for an alleged incident, but he was never charged due to insufficient evidence.

Why do we rarely hear of professional cricketers or rugby players, say, hitting the front/back pages in this way? It seems to happen with depressing regularity in the football world.
If charges are dropped against Evans, it probably won’t harm his career too much â€“Â it hasn’t affected the progress of Ronaldo, but then Evans, though talented enough, is no Ronaldo.
If Evans is found guilty, his football career will be in ruins â€“Â and who could have any sympathy for him?