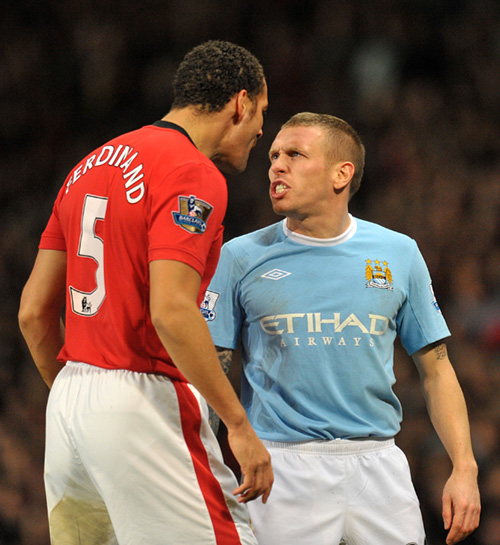 Craig Bellamy, fleet-footed attacker and black belt in the ancient art of bashing a team-mate with a golf club, has claimed that prior to his move to Cardiff City in the summer, none other than the giants of Manchester United were after him.

The temperamental forward, never a man to hide his light under a bushel, has spoken about the aftermath of Roberto Mancini’s decision to let the former Liverpool man leave Eastlands:

“Garry Cook (Manchester City’s Chief Executive) said to me it was the most phone calls he’d had on a player for a while.

Tottenham wasn’t going to get done and someone else came in above them as well, which would have caused a few stirs.”

Was this none other than City’s rivals who were trying to “cause a few stirs”? Well, after all but naming the Red Devils outright, little Craig suddenly goes all coy on us:

“I am not going to say anything, but it would have been a tough couple of weeks.

It would have been a miracle if it had come off. I sat down with my agent and we were realistic. Do we hold out for it, or do I go on?”

Well, with City not too keen on selling Bellamy to any fellow Premier League club, go on he did, all the way to his home town of Cardiff.

One can see how Bellamy would have provided Sir Alex Ferguson with another option up front and he arguably could have had more of an impact than Michael Owen, a player from just across the border in Chester.

However, Bellamy’s apparent move to United will now be consigned to the “what if” section of pub conversation topics, along with Cristiano Ronaldo’s near-move to Arsenal, Steven Gerrard’s ultimately failed transfer to Chelsea and Eric Cantona’s infamous brush with Sheffield Wednesday.