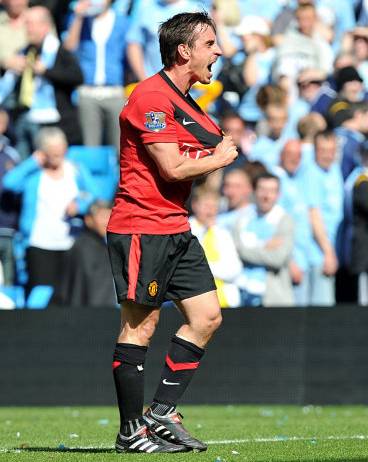 It seems that, as he moves nearer to retirement, Comrade Gary Neville is softening when it comes to his inherent loathing for anything that isn’t in some way connected to Manchester United Football Club.

After sending the world spinning off it’s axis last month by confessing through grinding teeth that he respected Liverpool’s trophy-winning pedigree, Neville has now caused a schism in the fabric of time itself by admitting that bitter rivals Manchester City are now genuine Premier League title contenders;

“Last weekend’s results (United drew 2-2 with Bolton) mean we are now behind Manchester City in the league, which hasn’t happened too often in the past 20 years so there is no doubt that we have to see City as major challengers this season along with Chelsea.

At the moment, City and Chelsea are above us and the money that City have spent, and the quality and depth in both squads, means we have to see them both as rivals for the title.”