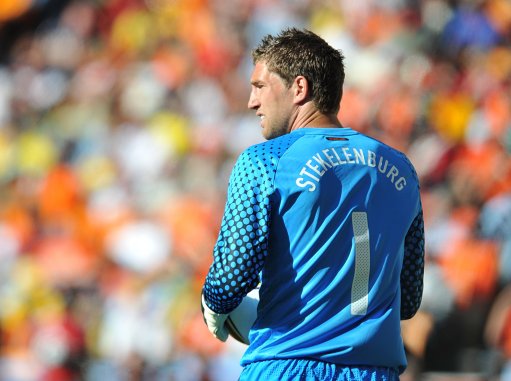 Ajax and Holland no.1 Maarten Stekelenburg has dropped a rather large hint that he may be about to join Manchester United this summer, telling Dutch magazine NuSport;

“[United] is a club where everyone wants to play. If (Ajax manager) Martin Jol said he is aware of the interest, I will take notice.”

Stekelenburg’s current deal with the Eredivisie side expires in 2012, and he has already stated that he will not be signing an extension. However, despite declaring his intentions to leave the Amsterdam Arena, when asked about a January switch the 28-year-old told the magazine that he is committed to seeing out the season with Ajax;

“It won’t happen. If you look at my contract it has only one year left after this season. Ajax want money for me and I have no problem with that. Financially, it would be the most interesting to sell me this summer.

I won’t leave this winter break. I started this season at Ajax to battle for the title and the Champions League adventure and I want to be there until the end.”

Seems like a good choice on United’s part. Bringing in current custodian Edwin van der Sar‘s replacement in the Dutch national team as his replacement at Old Trafford seems like the obvious solution, as it just so happens that Stekelenburg is a damn fine ‘keeper.