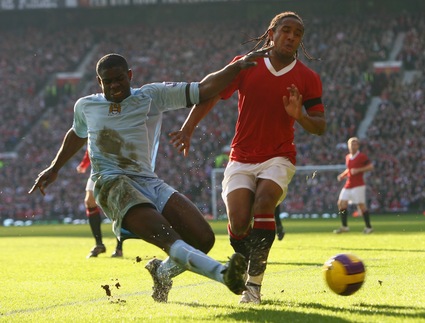 1. Fergie chewed gum throughout the minute’s silence. Classy guy.
2. Man Utd’s sponsorless kit looked really great – made me yearn for the days when all kits were that simple.
3. For all their talents, Man Utd are sorely lacking a) an incisive striker, and b) a decent right-back to replace Gary Neville. With Rooney suspended – after a dumb yellow card picked up against Spurs – United looked blunt up front. Wes Brown’s limitations are clear for all to see. Why didn’t Fergie try to buy Anelka last month? Van Nistelrooy has never been properly replaced.
4. Yes, let’s praise City fans for holding their tongues – but it’s sad that we should feel obilged to applaud fans simply for not whistling or shouting out. Are our expectations of fans’ behaviour so low?

5. Ryan Giggs has been playing on reputation for too long. He offered nothing against City.
6. Is Nani the new Kleberson?
7. The two best individual defensive performances this season? Micah Richards against Man Yoo at Eastlands, and Richard Dunne against Man Yoo at Old Trafford. They are the reason why City did the double over United this season.
8. Would Roy Keane or Gary Neville have let Anderson, Nani and co. play like that in such a meaningful game? I think you know the answer. United lack a leader. For all their talent and experience, Giggs and Scholes are too passive. In a post-match interview, Giggs didn’t seem that bothered about the result.
9. Carlos Queiroz partly blamed the defeat on fatigue. So why did United head off to play in Saudi Arabia not long ago? The words ‘greedy’ and ‘hypocritical’ spring to mind.
10. Why did John O’Shea start the game instead of Michael Carrick? Why no Owen Hargreaves from the start either? Such a big game and Â£30m of midfield ‘talent’ on the bench. Very strange.
Love to hear your thoughts on the gameâ€¦