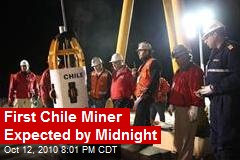 As if spending 69 days trapped underground wasn’t enough it seems that the Chilean miners’ trauma might not be over yet.

According to Metro the 33 men have apparently been offered Manchester United tickets, by Sir Bobby Charlton no less. Bob’s dad was a miner, see.

A United spokesman confirmed: “The club will do whatever we can to welcome them and arrange to meet the players.”

“Real Madrid wants not only to invite them to whatever match they choose at the Santiago Bernabeu, but also to offer them a tribute, our affection and the recognition from our fans they deserve,” Perez said. “For us it will be an honor to be able to receive them to celebrate their triumph of life.”

Perez said he had also sent a book with photographs of Madrid players signing each shirt, and a signed invitation to the Bernabeu.