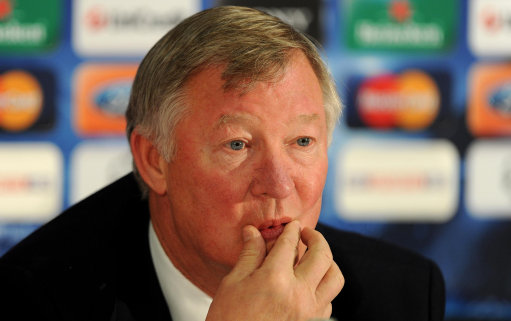 For those who may have missed it, Wayne Rooney released a statement last night that seemed to intimate that he refused to sign a new contract at Manchester United on the grounds that the current squad is a bit pap, and that the club don’t have sufficient funds to rectify the problem.

There were also a few paragraphs wholly dedicated to blowing smoke up Sir Alex Ferguson’s you-know-where, but let’s press on.

Ferguson is now set to hold talks with Gill over Rooney’s immediate future later this morning, but still saw fit to sum up the striker’s current situation via the popular medium of confusing dairy-based metaphor:

“Sometimes you look in a field and you see a cow and you think it’s a better cow than the one you’ve got in the field. It’s a fact, right, and it never really works out that way. It’s probably the same cow and it’s not as good as your own cow. Some players like to think there’s a better world somewhere else. It never really works.”

The United manager then went on to insist that he does have money to spend on players and also backed his ability to spot potential talent:

“We will invest in signature players when the time is ready. This summer wasn’t right for me. There was no value. There was one player we identified, but he didn’t want to come to England (Wesley Sneijder? Karim Benzema? David Villa?).

We realised that, to maintain the high consistency of being [at the top], which is as important as anything, we had to inject youth into the club. We realised a few years ago that Giggs, Scholes and Neville were never going to last for ever and so our policy is to develop footballers in their place.

“I had a player once who said to me that Rooney and Ronaldo weren’t good enough and he was not prepared to wait until they were good enough (Roy Keane? Ruud Van Nistelrooy?). But that’s the trouble with potential. People don’t identify potential. They’re very poor at it.

I’ve identified all my life the potential in young people. I know potential. I know how to develop and have faith in it. And young people surprise you when given the opportunity. That’s what this club is all about.”