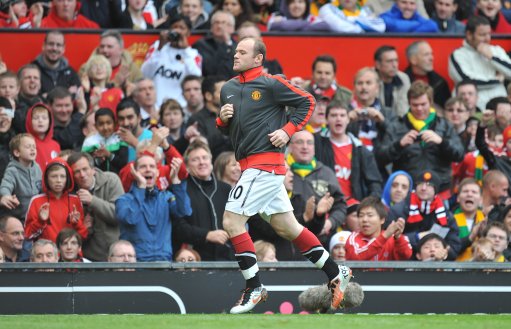 After keeping the press waiting all day, Manchester United released a damp squib of a statement at 7pm last night, announcing that the ongoing talks between the club’s hierarchy and outbound striker Wayne Rooney were adjourning for the night with ‘no significant developments’.

United’s released the following update via their official website:

“We are aware that there is intense public and media interest on the club at the moment, but there are no developments of note to report.

I can confirm a number of meetings have taken place, including with the player’s representative.

The outcome of those meetings will become clear in the near future. In the meantime, fans are asked to be patient.”

Seems like United are now trying to take the heat out of the whole debacle, could it be that Rooney will be staying at Old Trafford after all?

Meanwhile, balaclava-clad United supporters had to be dispersed by police after staging a hostile protest outside Rooney’s house in Cheshire last night.

A 30-strong mob reportedly made up of members of the club’s notorious ‘Men In Black’ firm descended on the mansion in Prestbury with a banner reading ‘Sign For City And You’re Dead’, but when officers attended the scene at around 8:30pm ‘the group dispersed peacefully leaving no offences to be disclosed’.