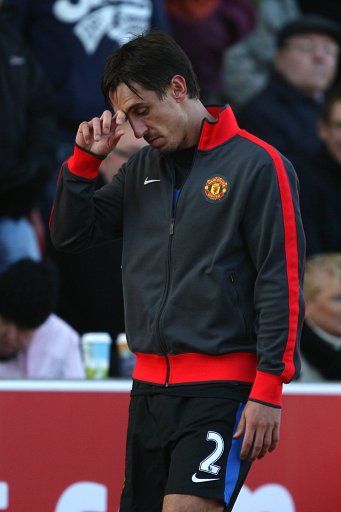 The Sunday Times of Malta newspaper have been forced to apologise to Gary Neville after ‘misquoting’ the Manchester United veteran in his very own column.

Speaking about the culmination of Wayne Rooney‘s contract wrangling, Neville was alleged to have said:

“After a difficult week the best outcome has been reached for all parties – except perhaps Manchester City.”

However, one little bit of that sentence turned out to be just a teensy ‘ickle bit completely fabricated – can you guess which four words that the Maltese rag may have added for effect?

“With reference to Gary Neville’s column in The Sunday Times of Malta of October 24th, the newspaper would like to clarify the following: At no point did Gary Neville state the phrase, ‘Except perhaps Manchester City’.

These words were added by the journalist who worked on the column with Mr Neville and were never intended to appear in the printed version of the article. Mr Neville did not utter these words, nor did he allude to Manchester City in any way.

We apologise unreservedly to Mr Neville for our error and regret the considerable inconvenience it has caused him.”

Because, as we know, Red Nev is now a Citeh sympathiser.