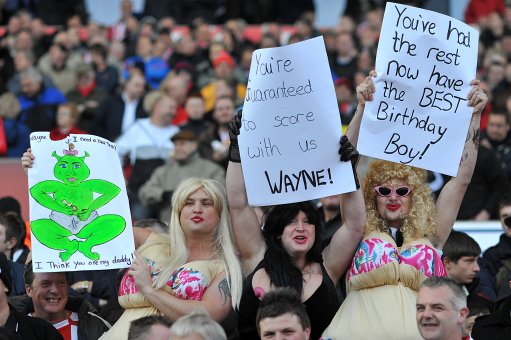 Whilst taking a thoroughly undeserved holiday in Dubai with his WAG Colleen, Wayne Rooney was apparently accosted by an angry Manchester United fan in the lobby of the five-star Burj Al Arab Hotel who asked the striker whether or not he felt he’d let the club down during his recent contract wrangling – to which Rooney abruptly answered ‘No’.

According to The Sun, Rooney apparently then went on to explain to this complete and utter stranger that he never had any intention of leaving United, despite releasing a statement last Tuesday that seemed to intimate otherwise.

Hmmm. Make of that what you will, although I suggest that such flagrant horsesh*t would probably make excellent fertiliser.

Anywho, the rag is also carrying some wonderfully enlightening details of the Rooneys’ mid-season jaunt to the UAE in a bid to ‘haul their marriage off the rocks’:

“The Sun (yesterday) told exclusively of how a glass was accidentally smashed as the pair argued in a posh restaurant. Yesterday they rarely smiled or touched

Mum-of-one Coleen sat alone by the pool for the second day running – waiting more than an hour for her injured hubby to arrive. She briefly joined him in the water before sitting by a rock.

They then ordered cocktails from a waiter – sipping non-alcoholic treats as sunburnt Roo covered up in a T-shirt from the 36°C heat.”