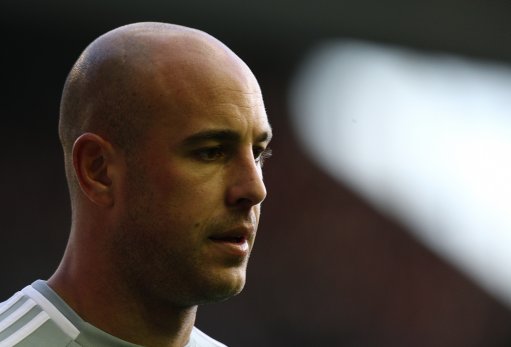 Liverpool manager Roy Hodgson has warned Manchester United against making a move for goalkeeper Pepe Reina, after the Spaniard was mentioned as a possible replacement for Edwin van der Sar. Oooh, bet Fergie is proper scared.

“It was just one of those stories that seems to occur – it’s just disappointing and annoying,” Hodgson told the Liverpool Echo.

“Pepe is fantastic here, he is a lifeblood of this team. Everything he does around the club is excellent – he is always lively in the dressing room, he is always first class in training and he always wants to do more to improve.

“He demands better from those around him, he is always pushing people on. He is a player who we hold in the highest esteem.

“If (Sir Alex) Ferguson is looking around at the end of the season and he has got lots of money to replace (Edwin) van der Sar, he might very well want Pepe Reina because he is the best around.

“But we do not want to sell him. I would like to think that we are going to become a successful club once again and Pepe is crucial to that.”

Fergie would LOVE IT if he could lure Reina to Old Trafford, partly because Reina is good but also because it would annoy Liverpool fans no end. A trail of delicious tapas laid out along the M62 should do the trick, Alex.