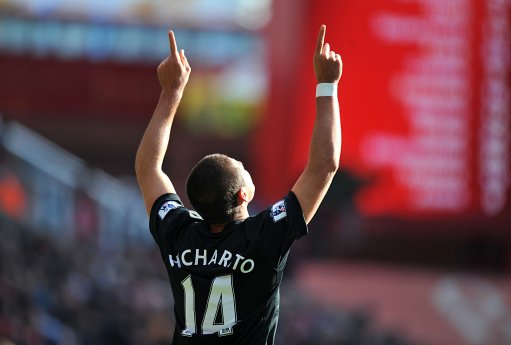 Back in early 2009, Chicharito was struggling in the Chivas reserves (who play in Mexico’s second division) after failing to make any kind of tangible impact in the first-team, failing to hit the net for the majority of both the 2006/07 and the 2007/08 season.

However, a pep-talk from Javier Hernandez Snr (himself a former Mexico international, nicknamed ‘The Pea’ due to his green eyes) convinced the then-20-year-old striker to concentrate all his efforts on his football rather than the business administration degree he was studying for at Guadalajara University:

“He doubted he was capable of playing in the First Division. We told him he had to be patient, but as a young player he was impatient.

I never thought he would make it as a professional. Then he started maturing and, when he was about 15, we saw that change in him. When his goal was to become a professional we supported him.”

Chicharito’s grandfather Tomas Balcazar (who again represented El Tri, this time at the 1954 World Cup) also assisted in talking Javier Jnr out of a ridiculously early retirement, and was amazed to later turn on the television to find that his grandson had signed a contract with Manchester United:

“They tricked us, Javier and [his father] told us they were going on holiday to Atlanta! The next day the phone rang and they said, ‘Turn on the television and you’ll see something important’.

The first thing that we saw was the boy’s face! Then we saw the badge of Manchester United. We just couldn’t believe it.”