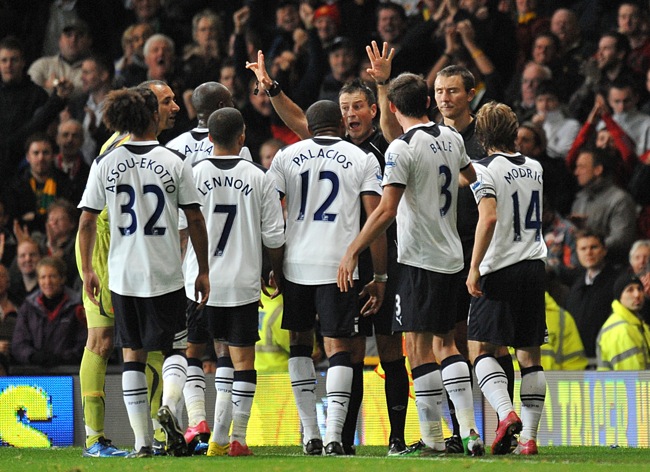 Get away from me! I will only accept complaints from Mr Rio Ferdinand

No one involved came out of it well, but who was most to blame for the bizarre chain of events that doubled United’s lead? The candidates:

Referee Mark Clattenburg – Said he saw Nani’s deliberate handball but then played advantage to Tottenham. And when no advantage was forthcoming, surely Clatters might then have reached for his whistle. He didn’t have to award the goal because of something refs don’t use often enough: common sense and discretion.

Spurs keeper Heurelho Gomes – Gomes didn’t use the ref’s advantage, because he didn’t seem to understand what the hell was going on. Brain freeze by the Brazilian, or is he innocent? Either way, when confusion reigns, a swift kick into row Z is usually the best option.

Man Utd winger Nani – Played on 100% correctly if unsportingly (urged on by his team-mates and the prospect of a bollocking by Fergie, it should be said) but, knowing he handballed in the area, should he have done the sporting thing and let Gomes play the ball first?

My vote goes to Clattenburg, who is a good ref and often sensible. But put simply, there was no advantage in his advantage. The hapless Gomes hardly covered himself with glory either, but in his defence it wasn’t clear what decision the ref had made. As for Nani, he is blameless, surely – 99% of Prem players would also have played to the whistle.  My only gripe with the Man Utd winger, who had a fine game overall, is in how wildly he celebrated his goal. Not quite deserving of a backflip, fella.

Who do you think was most at fault? Vote with your favourite finger…