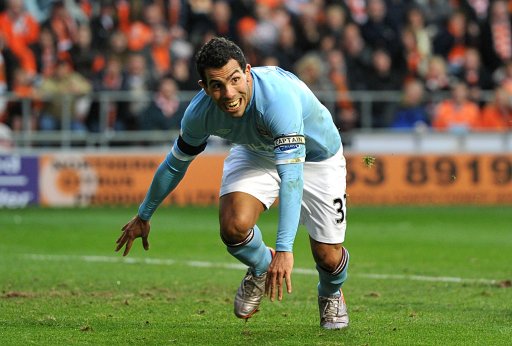 Manchester City captain Carlos Tevez is confident that he will be fit enough to fly back from Argentina in time for the Manchester derby next Wednesday, after missing a flight on Monday (at the behest of the Argentinian national team’s medical staff) due to health concerns.

Tevez is currently laid up in Buenos Aires after being allowed to return home to recover from the severely bruised thigh that he sustained during City’s defeat against Arsenal last weekend.

However, the striker has been quoted in The Sun as saying that he hopes to be back in England by the start of next week:

“I hear all the City news and have suffered because of those two defeats (against Arsenal and Wolves), but the season is long and we will have chances to advance up the table.

“I believe I am getting better and will take a fitness test in Buenos Aires over the weekend and will assess the situation after that. I intend to be in the right condition for the derby against United.”

Ah ha! The old ‘fitness test at the weekend’ schtick! Why not buy yourself a few more days in the Argentinian sol before having to trudge back to murky old Manchester?