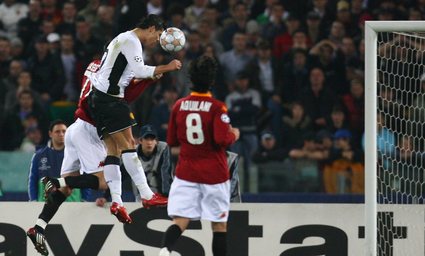 1 United are through to the semi-finals. It is difficult to imagine Roma (or many sides for that matter) scoring two goals at Old Trafford at the moment.
2 Cristiano Ronaldo is unstoppable on present form.
3 But he is also a moody git. We don’t need the outstretched arms and face of disbelieving sorrow each time an opposition player brushes against you, C-Ron.

4 English sides seems to be getting pretty good at winning 0-2 in Italy.
5 Rio Ferdinand is playing some of the best football of his career. Captaining England seems to have done him the world of good. He looked very assured and oozed confidence last night.
6 But the injury to his defensive partner, Nemanja Vidic, could be costly in the grand scheme of United’s season. The Serb’s twisted and jarred knee looked pretty nasty.
7 Mirko Vucinic is a player who deserves more respect than he gets. I always rated him as a half-decent attacking player, but he led the line very impressively for Roma last night.
8 Wayne Rooney looks like Malcolm Glazer.
9 Christian Panucci has discovered the secret of eternal youth. He never gets an older. I’m sure he has been 34 for about the last four seasons…
10 Bring on United versus Barcelona!