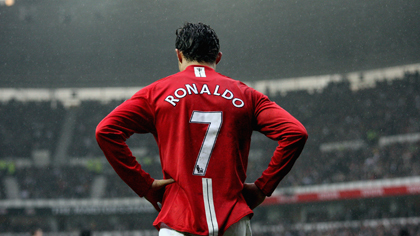 There can’t be any doubt that Cristiano Ronaldo is currently the best player in the world and possibly the best player in Man United’s history – his 35 goals this season have carried United to the top of the Premier League and within touching distance of another European Cup semi-final.
The only problem with taking your game to a higher level than anyone can reach is that you can feel disappointed by the ‘mere mortals’ playing around you. While Ronaldo has been breaking scoring records this season, his number of assists has fallen dramatically – suggesting a selfishness and lack of trust in his teammates.
And, there have been points this season where Ronaldo has looked on in disgust with hands on hips when passes don’t come directly where he wants them – not unlike another player who raised his game to an unreachable level, a certain Thierry Henry.
Could Ronaldo be in danger of letting arrogance overwhelm those around him?