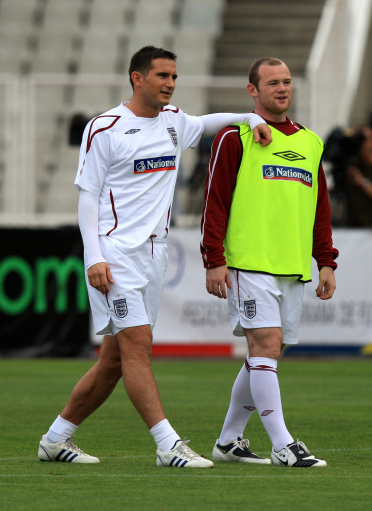 Chelsea midfielder Frank Lampard has sprung to the defense of his England cohort Wayne Rooney after a turbulent few weeks that have seen the Manchester United striker’s stock sink lower than Joachim Loew at low tide in Lowestoft.

Lampard’s impassioned plea is far too long to reproduce in full, but here are the choice cuts (of which there are many):

“People who call [Rooney] thick, it’s just a lazy thing to say by looking at him and saying, ‘He’s a footballer, he looks quite tough because he’s come from that background,’ and all that kind of stuff, but he is sharp.

“I think the people who are calling him thick have got a certain element of thickness about them.

“He’s a confident boy and he has a sensitive side to him. During the World Cup we’d sit in a room together and watch some of the other games and stuff like that.

“He’s a very sensitive lad, you can have a good conversation with him about anything you want.”

Feeling queasy yet? Well hang on to your breakfast, because there’s more where that came from:

“He’s a very cute, worldly lad for how young he is. He has no problem relating to older players, he treats everyone the same.

“Wayne talks to David Beckham the same as he would to a new player who’s just come into the squad from Stoke or Bolton, and that’s the beauty of him I think as a person.

“He’s got a great sense of humour. I love being around people who will make me laugh and he makes you laugh constantly.

“When you’re sat at a dinner table with 20 people he can dominate the conversation just through wit and the confidence in the way he speaks.

“He looks like he has this bulldog way about him, a little powerhouse, and then the first day he trained you could see he had this touch and awareness that was …like a genius touch.

“There’s a tender warmth in his eyes that really brings a soul to ease. Those eyes, like two pools of liquid desire, drag and pull at every fibre of your being until you can resist no longer. Why, when I’m with him, I can feel my five senses break free as I strive to reach the pitch of ecstasy.”

I defy you pick out the one that Pies may or may not have completely fabricated.