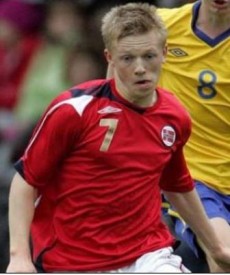 The 15-year-old Norwegian recently starred in an international tournament against the heavyweights of France, Spain and Holland, after which a number of clubs started to take an interest in him.

But United got in there first, and Daehli has now agreed a three-and-a-half year deal with the club. He will officially move to Old Trafford on 1 February 1 2011.

“This is really cool – I am going to learn a lot,” Daehli told Dagbladet.

Because Daehli has not yet turned professional, United will not pay a fee for the teenager but have reportedly agreed to pay Stabaek £8,626 a year for the rest of the player’s career and may also contribute funds to the Norwegian club’s academy as well as that of his previous club, FC Lyn.

“He is one of the best players in Europe in his age group. He is the best player I have ever seen at his age and I have seen a lot of international players at that age.

“He can play right side, left side, maybe off the main striker. He can be a little bit Messi, a little bit Xavi.

“He is outstanding and can be a complete football player. He has the mentality, the technique, his attitude is very good. He has everything. If he misses something, it is the physical side. He has to be stronger. But he is 15 and that will come.”