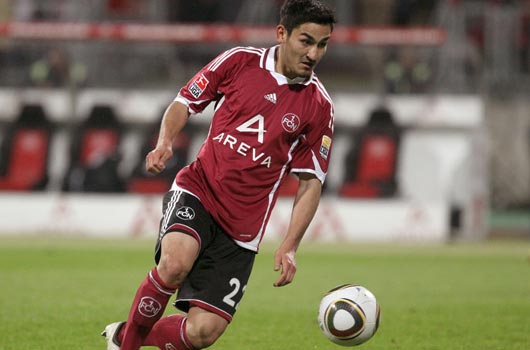 FC Nurnberg have revealed that they are resigned to losing £7 million-rated midfielder Ilkay Gundogan in the summer, with Manchester United set to take advantage of the Bundesliga side’s ‘economic considerations’ after sending several scouts to watch the 20-year-old in action.

The German U21 international’s contract expires in the summer of 2012, and it appears that Nurnberg’s hierarchy are left with no option but to cash in on their prize asset.

Nurnberg’s general manager Martin Bader has admitted that he has now conceded that Gundogan will be moving on come July:

“We are subject to economic considerations. It’s a fact that clubs from inside and outside the Bundesliga have learned about the exceptional qualities of Gundogan. We cannot stand in his way.”

From the admittedly little that I’ve witnessed, Gundogan seems to be a creative central midfielder with a knack of springing up in the right place at the right time and a penchant for the odd mazy dribble here and there, not a million miles away from squinty dynamo Emre Belozoglu in terms of style – although that may just be the Turkish heritage playing tricks on me.

See what you make of him…