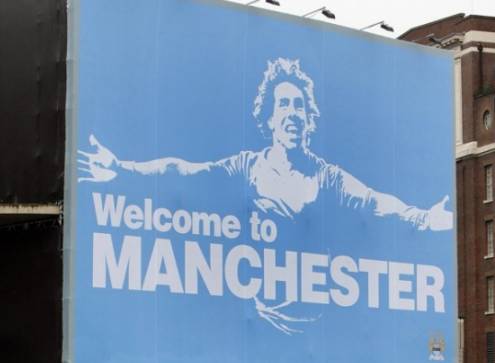 As you may be aware, it’s the Manchester derby tonight – a fixture which never usually manages to pass without incident, given that the two factions involved utterly loath one another.

After Manchester United left-back Patrice Evra started the ball of contempt rolling earlier this week by claiming that a win over City would be ‘nothing special’, his manager Sir Alex Ferguson has continued the goading by branding City’s ‘Welcome to Manchester’ billboard as ‘stupid’.

The poster was put up nearly 16 months ago to mark the occasion when former United striker Carlos Tevez defected across Manchester to Eastlands, but Ferguson is apparently still irked by it, suggesting that many City fans are now embarrassed by the fact that the print has become infinitely more prominent than their trophy cabinet:

“I don’t know how it was created, probably some advertising gimmick at City. But I don’t think they can be proud of it. I said it was stupid at the time. They probably think that now.

“I don’t see how they thought it would get more points off us when it came to playing on a football pitch.

“Maybe it was worthwhile for some of the supporters but I think a lot of them were embarrassed. They would rather see that trophy being paraded through the city before they start screaming from the rooftops.”

Seems like City’s fairly innocuous little publicity stunt has achieved exactly what they wanted it to achieve, in that every time Ferguson gets driven through Salford, he’s reminded that he effectively swapped Tevez for the plasticine hamstrings of Michael Owen.