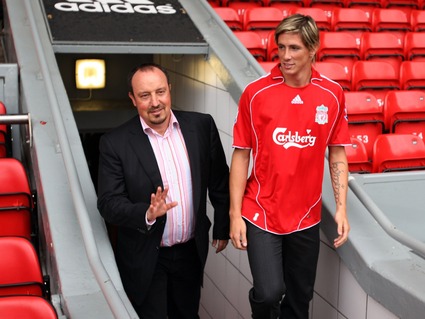 Liverpool must repay Â£31.5 million to banking institutions in little more than a year or risk having to sell Fernando Torres and Ryan Babel! Yeah, can’t see that happening. The Times
Avram Grant gives the silent treatment to newspaper journalists after Chelsea’s win at Everton. Daily Mail
Hicks vs Gillett, round 1,268: George Gillett issued a belligerent response to Tom Hicks’ request that he sell his 50% stake in Liverpool when he vowed last night to prevent the Texan taking majority control and accused him of destabilising the club’s Champions League campaign. Guardian

Spurs boss Juande Ramos claims he knows which players he wants to keep but has hinted that injury-prone Ledley King may not be at the club next season. BBC Sport
Chelsea are confident of landing Brazilian superstar Kaka in a Â£50million deal from AC Milan. The Blues are ready to move after the Italian club agreed a Â£22m fee to sign Ronaldinho from Barcelona. Mirror
Manchester United’s stand-off with Wes Brown over a new contract is set to end this week with the defender signing a new deal to stay at Old Trafford. The England international is understood to have negotiated close to the Â£55,000-a-week deal he wanted to move him into the middle band of salaries at the club. Independent
Amauri‘s agent has confirmed that Arsenal have joined the race to sign the highly-rated striker. Italian sources claimed earlier this week that Arsenal were ready to offer the Brazilian-born front-man more than Â£60,000-per-week to move to Emirates Stadium. Sky Sports