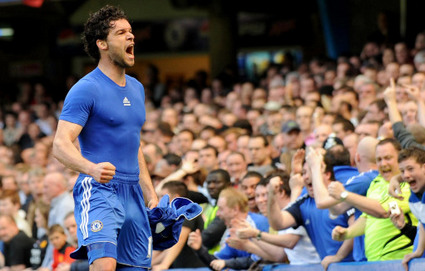 Michael Ballack had his best game in a Chelsea shirt on Saturday against Man Utd, and I believe it’s no coincidence that Frank Lampard was not playing alongside him. The Englishman, who was absent due to the sad, untimely death of his mother Pat, is a fine player but in my opinion he is a poor man’s Ballack.
Chelsea’s midfield looked so much better balanced with the twin towers of Ballack and Essien at its heart; Lampard would have got in the way, or compromised the team with his relentless runs into the box – some of these runs pay off, many do not. Do you agree with me that Chelsea would not have beaten Man Utd with both Lampard and Ballack in their starting line-up? Vote below…