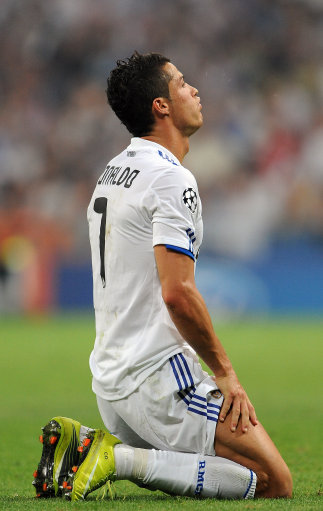 Remember that permanently oily-looking guy that used to do really good kicks and goals for Manchester United a couple of years ago, before sodding off to Real Madrid for a bajillion Euros?

If so, it should come as no surprise that, after winning three Premier League titles, a Champions League and being named as FIFA and PFA Player of the year during his six-year stint in England, Cristiano Ronaldo remembers those heady old days rather fondly:

“To be honest I miss the Premier League a lot. Of course I have good memories about Manchester. I have good friends there and I miss them a lot, so you never know.

“Sir Alex Ferguson is like a second father for me. He helped me a lot during the six years I was in Manchester, he taught me many things.”

Hmmm. If he’d have thrown in a shy wink half way through, I’d be tempted to call that a ‘hint’. If you hadn’t guessed already, ’tis a rather slow day in terms of anything actually happening anywhere in the footballing sphere. Hey ho.