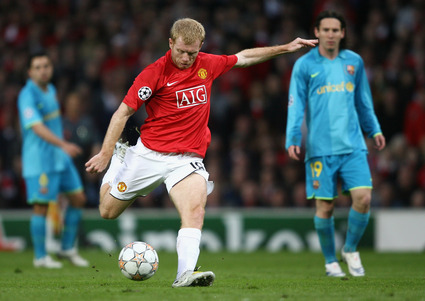 1 What a time for Paul Scholes to score his second goal of the season. And what a goal!
2 Carlos Tevez is an absolute star. An excellent performance from the Argentinian – full of energy and always working hard for the team.
3 Barcelona (and by Barcelona I basically mean Messi and Xavi) are a joy to watch in possession, but the team lacked cutting edge.

4 Thierry Henry grabbing the equaliser would have been a nightmare scenario for United. His wayward backpass going out for a corner was a moment to be savoured though.
5 Frank Rijkaard is going to get sacked.
6 Perhaps Cristiano Ronaldo will think about remoulding his reputation as a diver. The referee gave him very little last night.
7 Ryan Giggs came on and gave probably the most immature performance a 34-year-old could give. Uneasy in possession and attempting ambitious passes, Giggs was not the calm head Fergie would have hoped for.
8 It is never nice to see a disappointed Carlos Puyol. It is like telling your pet poodle that he has got to go to the vets.
9 Fergie’s dancing antics were a bit over the top. I thought he would be calmly focused until the trophy was in his hands…
10 The FA should get on to UEFA and get the final moved to Wembley. It seems a bit daft to trek all the way to Moscow.