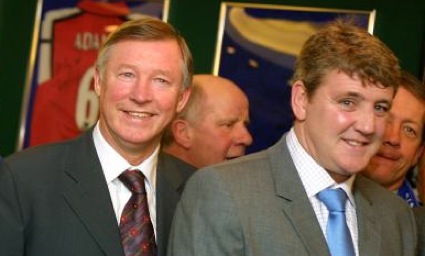 Seems that Sir Alex Ferguson has no shortage of go-to guys in a crisis. Alan Curbishley (lurking on the right of this photo) ordered his West Ham team to roll over and let United scratch their tummies – “Lads, me and Alex are in this wine club, so don’t do anything to piss him off, right…” – and now Fergie can turn to former captain Steve Bruce.
I believe Brucey is an honest, decent man with principles and… ah, who am I trying to kid. If Bruce’s Wigan put up enough of a fight at the JJB next weekend, and somehow get a point out of the game, Fergie will never speak to him again. And poor Steve wouldn’t want to upset the most influential manager in the Premier League, would he? Vote below…