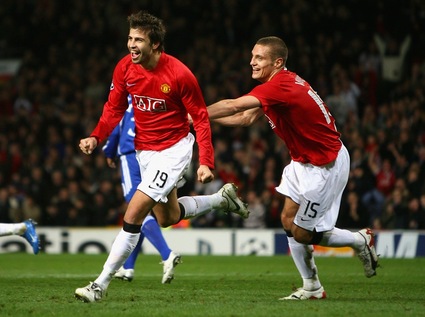 1. Gerard Pique to Barcelona
The Manchester United defender is believed to have agreed personal terms with Barca. El Mundo Deportivo reports that the Spanish club have already agreed a four-season deal with the player’s representatives. [Talking Soccer]
2. Ricardo Carvalho to go wherever Jose Mourinho goes
The curly-haired Portuguese centre-back has been tipped to join former boss Jose Mourinho – whom he followed from Porto to Stamford Bridge in 2004 – when he takes up another managerial post. “I don’t know yet if I will stay but I have a contract,” said the ever-loyal Carvalho.
3. Tal Ben Haim to Feyenoord
According to various sources, the Dutch club Feyenoord are keen to take Chelsea’s versatile (i.e. a but crap) defender, although no fee is currently being mentioned. [Vital Chelsea]

4. Mikael Silvestre to Bordeaux
Silvestre has admitted he would be tempted by a move to Bordeaux – the club of his “heart” – in the summer. The 30-year-old defender is out of contract at the end of the season and would like a switch to Bordeaux, where his former United team-mate Laurent Blanc is the head coach. [Clubcall]
5. Kevin Doyle to Aston Villa
Martin O’Neill is rumoured to be a bit keen on Reading’s fox-in-the-box, as long as he costs no more than Â£4m. [AVFC Blog]
And the big one of the day…
6. Cristiano Ronaldo to Real Madrid
As Pies reported earlier today, C-Ron has been fluttering his long lashes in the direction of sunny Spain. Surely he wouldn’t leave Man Utd when everything is going so well for him? Watch this space.
Which of the six rumours sounds like it could be true, if any? Vote below: