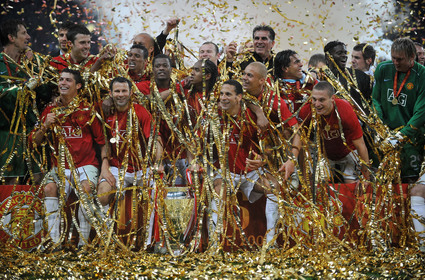 1 Man Yoo might not have deserved it on the night, but it has been their season. They have been the best team in Europe this season and it is not too often that the best team wins this competition.
2 If anyone deserved to miss a penalty it miss Cristiano ‘Ball-kisser’ Ronaldo and his super slow-mo run-up.
3 And if anyone didn’t it was John Terry. Excellent throughout and kept his side in it. The tears said it all.

4 Congratulations to Sir Alex Ferguson on winning the trophy for a second time AND doing a passable impression of a drowned rat.
5 There was a few tetchy players who were ready for bed before the end of the match. It was 1am local time to be fair. Didier Drogba was a prime example.
6 Ryan Giggs has been a great servant to Man Yoo and British football, but he always seems to be a passenger in his cameo appearances these days. He should have settled the match before it got to penalties with a great chance.
7 This summer’s must have football accessory is cramp.
8 Or is it a tie? Minutes remaining in the most important game of the season and the best insight David Pleat can offer on Avram Grant is: “Still hasn’t got a tie on, Clive.”
9 The excitement of winning the Champions League affects even the most experienced pro. Edwin van der Sar – winning the trophy for the second time – still managed to drop the f-bomb in the first sentence of his post-match interview.
10 It was great to see an extra-time period wear both teams actually tried to create chances.