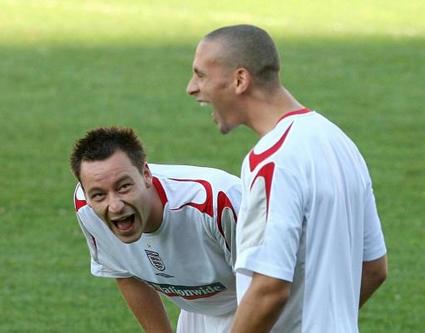 Don Capello has chosen JT to skipper England for their next game, a meaningless friendly against the USA, presumably as a consolation prize for spunking the CL final up the wall. But is Terry the best long-term candidate? Let’s see…
JOHN TERRY
Strengths Indestructible, fearless, passionate, great in the air, knows exactly when to hoof the ball into Row Z.
Weaknesses Difficult to like, wears his heart on his sleeve, lacks pace, not great with the ball at his feet, cries like a girl when defeated.
versus…
RIO FERDINAND
Strengths Improved leadership skills, in the best form of his life, composed on the ball, great positional sense.
Weaknesses Difficult to like, prone to lapses in concentration, uses the word “merk”.
Who gets your vote?

Me, I vote for Rio, every time. Better player than Terry, and that’s what counts.