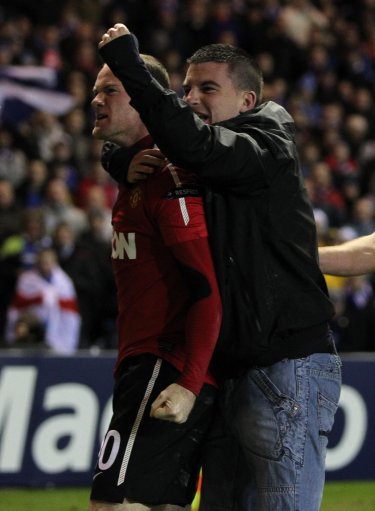 If last night’s stale Champions League tie between Rangers and Manchester United is ever going to be remembered, it will be remembered for one of three things.

Firstly, it was the only time in living memory that Paul Scholes has ever gone in for a full-blooded sliding tackle and actually won the ball cleanly without the need for a caution.

Secondly, it may be recalled as the game in which Dimitar Berbatov tracked an opponent for the entire length of the right-flank (nabbing the ball back in the process), without just giving up with a laconic, sunken-eyed shrug after about 15 metres.

Rooney’s 87th minute penalty was enough to win the game for United and, after stepping up to dispatch the spot-kick amidst a torrent of boos, his manager Sir Alex Ferguson hailed the striker’s determination:

“It took a lot of courage to take the penalty kick. It was not an easy night, he missed a couple of chances but that’s what you expect with the rustiness in his game. We are pleased for him.”

Highlight of the game for me? The cheeky ad board-vaulting United fan that stole in to rob Michael Carrick of the pleasure of being the first to celebrate with Rooney after his comeback goal. Priceless.