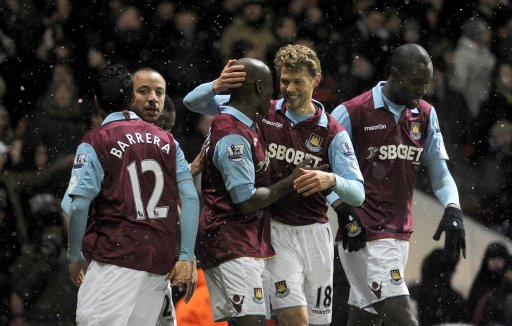 Manchester United manager (and he of the charming red beanie) Sir Alex Ferguson has admitted to being taken aback by the manner in which his side were soundly whipped by West Ham in the Carling Cup at a snow-bound Upton Park last night – surrendering their unbeaten start to the season and their 29-game unbeaten run in the process.

Ferguson’s side were technically felled by two goals from Jonathan Spector (his first goal since joining the Hammers six years ago) and a further brace from Carlton Cole, but it was the snappy wing play of on-loan forward Victor Obinna (who also had an effort ruled out for offside) that truly destroyed United, and in particular substitute right-back Rafael, on the night.

Summing up the game for MUTV, Ferguson was understandably irked by what he saw:

“We had one or two half chances, [but West Ham’s] goals killed it. You can’t just give goals away at this level.  The thing that sparked it was the goal that was disallowed because it got the crowd up.

“Then that first goal was a break for them. We were in control in the early part, played some good football. But goals change games.”

Just out of curiosity, isn’t a double strike from Jonathan Spector one of the harbingers of the apocalypse?