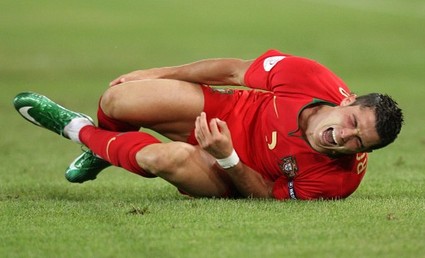 Ballack was immense in Germany’s win over Portugal. He inspired his team-mates to play above their level, which is the true measure of a world-class player – Diego Maradona, a better player than Ballack, had the same effect on his Argentine team-mates.
The current best player in the world, by contrast, didn’t inspire his Portuguese team-mates at all – he was more likely to be seen holding his arms aloft in theatrical disgust, or beating the turf in frustration. We saw Ronaldo at his worst last night: his brilliance, glimpsed on a couple of occasions only, was eclipsed by his petulance and vanity. 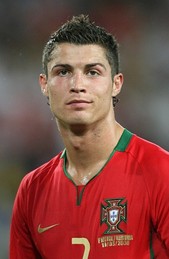 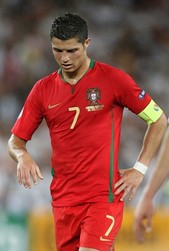 Ronaldo deserved to be on the losing side, Ballack did not. The German captain is a far more mature player than C-Ron, but then he is several years older.
That said, Ronaldo has been around for a while and this was the tournament where he should have showed us how much he has matured in the last couple of seasons. Instead, he showed us how much growing up he still has to do. When things don’t go his way, he doesn’t have the mental strength to lift his head and encourage those around him – instead he demands the ball and sprints towards the opposition box with a reckless disregard for his team-mates that says: “Do I have to do everything myself around here?”
Is such a selfish player really worth Â£200,000 a week? That’s what Real Madrid have to ask themselves…