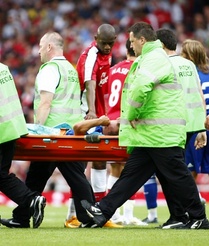 Real Madrid midfielder Wesley Sneijder’s knee injury will rule him out for three months, a relief to the player who had feared a longer absence. Tests showed Sneijder did not tear ligaments when he was challenged by Arsenal’s Abou Diaby in a friendly. [Canadian Press]
Alex Ferguson is a secret film buff [The Spoiler]
Blackburn sign Man Utd defender Danny Simpson on season-long loan deal. Hmm, Paul Ince calling in a favour there? [BBC]
West Ham striker Craig Bellamy is at the centre of a police inquiry after a foul-mouthed bust-up with a female fan during last night’s 5-3 friendly win at Ipswich. Ah, welcome to the new season [Mirror]
A handy recap of C-Ron’s ex-girlfriends [The Offside]