United desperately need another forward. But who? 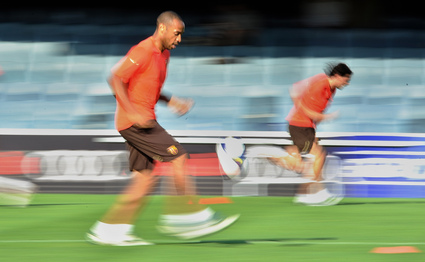 C-Ron is out for two months, Louis Saha is made of glass, Fraizer Campbell is too raw… the attacking back-up to Carlos Tevez and Wayne Rooney – neither of whom are orthodox strikers – looks thin indeed.
From a fan’s eye view, we all know that Man Utd need to sign another forward before the summer transfer window slams shut – Fergie knows it too, but he can’t seem to get the man he wants: Dimitar Berbatov. The Utd boss feels that Spurs have dicked him around over the signing of Berbatov, so he has been looking elsewhere…

Reports suggest that United have approached Barcelona about the possibility of signing Thierry Henry, for around Â£20m.
Henry has flopped at Barca and must be keen on an escape route, not least to a world-class club at which he can add to his collection of silverware. However, United – although they fulfil that criterion of being a club that will challenge for trophies – is surely not a realistic destination for an Arsenal legend.
Would Arsenal fans forgive Henry if he signed for the enemy? Some would, but football fans are not a reasonable bunch – many more Gooners would want to put him in the stocks in the centre circle at the Emirates and throw fruit at his treacherous face.
It’s a difficult situation. As a professional, it makes sense, 100%, for Henry to go to Old Trafford. But thinking with his heart, Henry must be aware of the emotional consequences if he returns to England and signs for a club that many Gooners despise.
Should Henry risk it? Is it a good move for him?