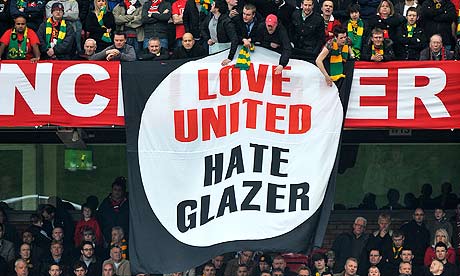 The Sun are carrying the EXCLUSIVE! news today that Manchester United’s collective owners, them there Glazer boys, may be about to ‘double their money’ by flogging the club to the Qatari royal family (beats a Burmese junta I guess), who are apparently headed up by Sheikh Hamad bin Khalifa Al Thani.

According to the red-top’s report, United’s future has been ‘thrown into doubt’ after the club’s non-executive director Mike Edelson revealed thus: “It’s no secret that, at some time, the [Glazers] will sell.”

Which all sounds a little obvious to me, but hey-ho. The Sun continue to suggest that the ‘door is now open’ for the Qatari’s to complete a £1.5 billion takeover, that would see the much-loved Yanks recoup over double the amount that they initially invested in the club almost five-and-a-half years ago (£790 million).

Thankfully, an otherwise anonymous ‘Middle East football finance expert’ serendipitously turned up at the SunSport offices this morning to help shed a little light on the speculation:

“They have made tentative moves (into buying United) before with little success, but this time it looks like they could be going for it. Now they have landed the 2022 World Cup, the country wants to expand its influence in the game across the globe.”